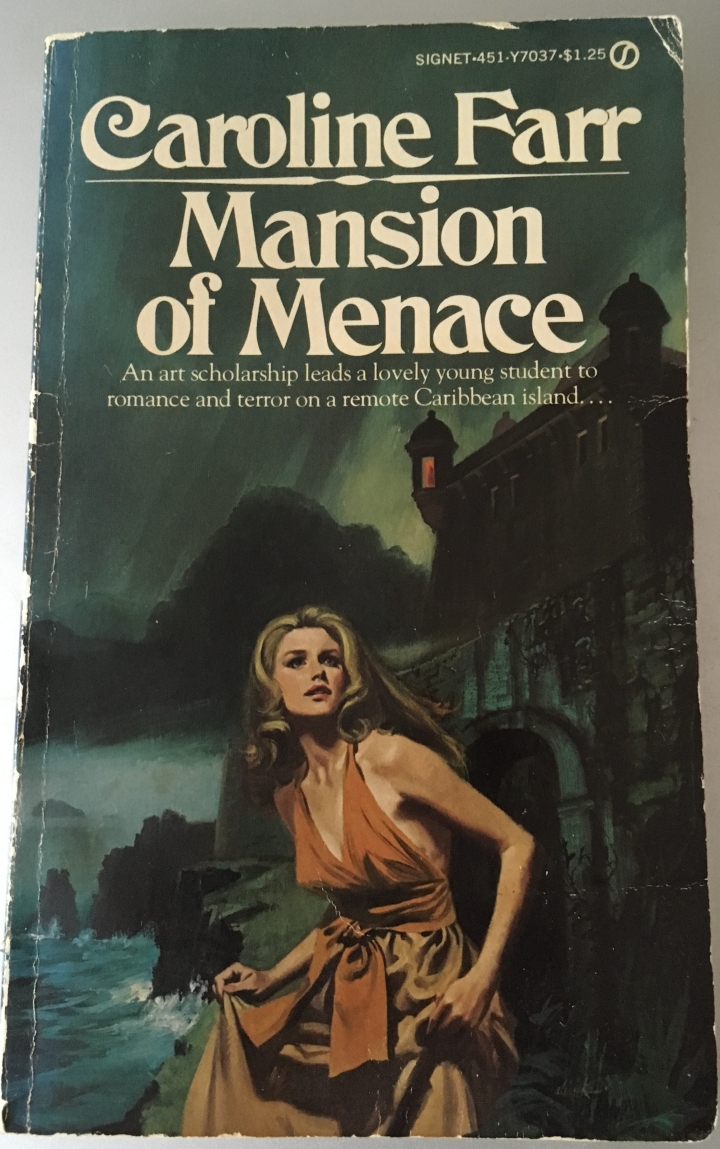 “I made a brush stroke, examined it critically, and wondered if the color was exactly right.”

Irene Demar is an art student attending the University of Miami.  As the story opens, she is working on her final project before graduation, hoping that it will win her the coveted Perier scholarship in Paris.  She bullies a law student by the name of Paul Haldane into posing for her.  They meet again at the Commencement Day Ball, during which they dance and flirt some more. Irene suggests that she make a gift of the portrait she did of him, which he eagerly accepts, after which he fails at offering her a ride home, and then walks across the room, and out of her life (or does he???????)

Irene is turned down for the Perier scholarship, but offered an arguably more prestigious one with “Monsieur Jean-Pierre Haver at Montparnasse College on the island of Cimaroon in the Windward Island of the Caribbean”, which she accepts.  She journeys to the school by air and by sea, and is greeted upon arrival at the wharf by student (or is he???) Philip Hudson, who is tanned and shirtless.  He drives Irene to Montparnasse (Home of the Gods), which is shaped like a “huge, solid block of brick”.

Irene is greatly impressed by Professor Haver, who looks younger than his fifty years — strong, with black hair greying at the temples.  Obviously his charisma is too much to bear, because, within pages, for no reason, she is afraid.

But perhaps there is a reason.  In the night, someone creeps about and opens the door to her room.  Co-student Hank decides to leave the college, and is not heard from again, much to the consternation of his best friend, Greg.  The next day, Irene explores the boundaries of the estate, is pursued by a mysterious man with a knife, and proceeds to tumble down the slope to the beach, getting sand in her eyes and failing to immediately recognize her rescuer, who turns out to be………Paul Haldane!!

He is the inheritor of his late father’s lavish estate, and blames Professor Haver for his father’s mysterious death.  Irene learns that Haver leased the land for the college from Haldane Sr.  She spots her portrait of Paul among the various works of art on display, and takes note of another done by Jean-Pierre Haver, “Dancing Nudes”.  Paul recommends that she sneak back into the art colony, given the rancorous nature of his relationship with Haver.

Before you know it, Irene is summoned to meet Haver at the gallery, in order to be smothered with ether and borne off to a dark, dank chamber.  Clearly she is being punished for seeing that guy naked!!  She witnesses a voodoo ceremony involving bits of her own hair, clothing and other personal effects.  She creeps weakly away and falls (again!!!) into a seaweed coated pit.  Here she discovers a dead body, although she cannot identify it in the darkness.  The pit fills with ocean water through a tunnel in the floor, and she is scraped out to sea…

Where she is rescued (again!!!)  by Paul Haldane!!  The dead body turns out to belong to the unfortunate Hank, who had gotten wise to Professor Haver’s nefarious ways.  Haver, as it turns out, was mired in debt, and killed Haldane Sr. when he announced that he would be cancelling the lease on the art colony.  Mystery solved!!!!

Irene and Paul are married one entire week after Haver and his voodoo accomplice are convicted for the death of Paul’s father….so romantic!!!  However, the shell of Montparnasse remains “a place with an aura of evil in [their] paradise.”

This is a text widget, which allows you to add text or HTML to your sidebar. You can use them to display text, links, images, HTML, or a combination of these. Edit them in the Widget section of the Customizer.